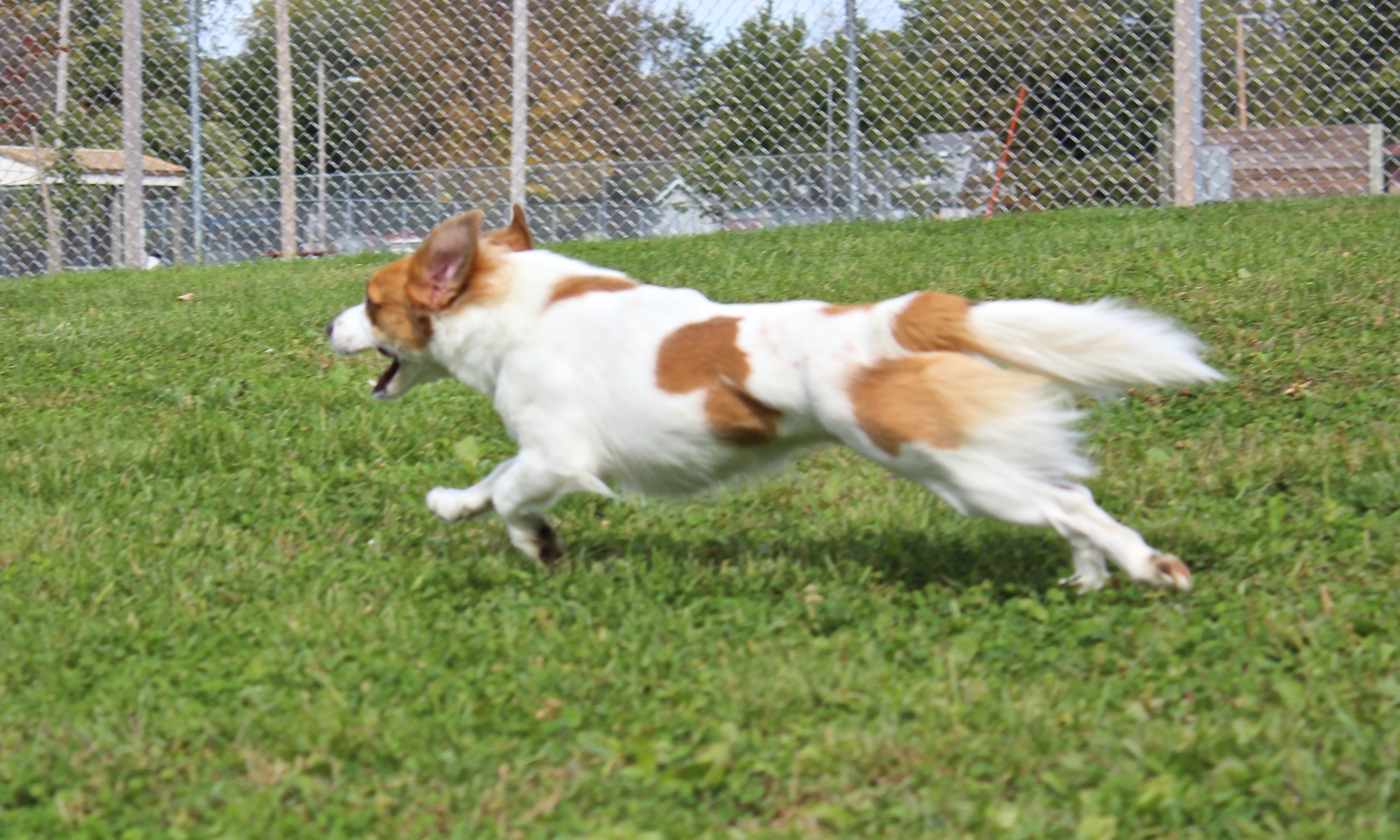 Maisie and I are going for a run together. If this statement conjures up a Madison Avenue image of dog-and-owner-running-together — Maisie trotting happily beside me on a lovely wooded trail while I bound along like a gazelle, my pony tail swish-swish-swishing behind me in time to our footsteps, my outfit perfectly coordinated, my cheeks sporting a rosy flush —then I apologize. No, what is really happening is that Maisie is straining at her harness, trying for all she is worth to just let loose and run full bore along the trail, while I am holding onto her leash, attempting to keep my shoulder in its socket, and getting one hell of an isometric workout in the process. My hair is way too short for a pony tail.

I had no intention of starting up a running regimen with my dog. I tried that many years ago with Henry, who was much more interested in stopping along the way to check out every and any smell that caught his nose. More than once I ended up tangled in his leash and on my ass on the hard ground of a Seattle sidewalk. But one day Maisie and I were walking along in the park by our house and I just felt that impulse to pick up speed. I just wanted to run and so I did. Maisie, of course, did not miss a beat when she realized what was happening, but Maisie has only two running speeds: absurdly fast and wickedly, absurdly fast. She is also wickedly, absurdly strong, with most of her strength seeming to be in that barrel chest of hers. But I, too, am much stronger than my size would suggest and I am somehow able to keep her in relative control, am able to keep my arms by my side and so keep my shoulder and its socket happily married.

It’s been two and a half years since the morning my feet hit the floor and I felt like every bone in my body would shatter if I didn’t tip-toe (or even if I did); it’s been over two and a half years since I traded my running shorts in for a swimsuit. And while I discovered a new found love of swimming, I miss running and that has become more apparent with Maisie in my life. Running all over the dog park with her when there are no other dogs to do that job for me has brought the love of running bubbling up to the surface for me.

But like so many things in my life, I had turned running from something I love to do into a thing. I started running years ago because, like that recent day in the park, I felt inspired to do it. But then it grew into something I did with a goal in mind, something that had a training schedule and times to improve upon and the right clothes and the right shoes to wear while doing it. It also became another way for me to fall short of my expectations. That morning when my whole body felt like it would shatter? The goal was another half-marathon (which in the running world is a decidedly modest goal) and in spite of the relentlessly hot summer and how much my body hurt, I had to get in my miles, dammit.

When Maisie runs unencumbered, there are no expectations other than moving forward as fast as she can. When Maisie runs it is for the sheer joy of it, the sheer primal impulse to open her legs to their fullest extent — and sometimes for the brief, fleeting belief that if she runs hard enough, she might catch that taunting, cheeky squirrel. She doesn’t, however, worry about her time and whether or not her mile pace has slowed by a 10 second margin. She doesn’t worry about whether or not she has logged the requisite miles for this week’s training.

Sometimes we will be at the dog park and she will be lying down in the dirt, watching me clear across the park, her paws stretched out in front of her with her chin tucked between them, resting or waiting to pounce, I’m not sure which. But all I have to do is take a few short steps in the opposite direction and she comes flying towards me. I will run with all my might to get away from her, but she always catches me. And it’s always a little bit of a giddy thrill, this being chased. I feel like I did when I was a little kid and my older sister would start to follow me around with her arms raised straight out in front of her, the expressionless, blank gaze of a zombie on her face. I would be happily terrified and run for my life.

Since that day at our neighborhood park when I had the impulse to start running, Maisie and I have run a few more times together. I pulled out my winter running clothes from the drawer in which they were buried. We are starting slowly, just running two or three minutes for every few we walk. I’m in good shape (thank you, swimming pool) and she is young and strong, but I’m hoping to avoid the oh-my-goodness-my-bones-are-going-to-shatter feeling in the morning, so a gentle easing in is imperative.

But those few minutes of running that we are doing are making me extraordinarily happy, because there is something so beautiful about putting your feet to the ground like that, something so freeing about being on the trail and moving at that pace. I’m not sure if there is a running gene. I’m more inclined to believe that the joy of running is something inherent in being human. But there are people you see running who, like Maisie, are in their perfect expression of who they are, their perfect embodiment of happiness — and then are people who couldn’t look more miserable, their feet dragging and arms flagging, which makes me wonder which of those people I was when I was deep in my running routine. I’m going to guess it depended on the day.

The first day we “officially” ran (meaning the day I wore proper shoes and ran in short, timed intervals) I started fantasizing about running another half-marathon. Because that seems to be how my mind works. I go from bowling on a whim one night to a league to fantasizing about what it would be like to be on the tour. (I bowl at consistent 140-ish average. It has remained constant for three years. This is not even remotely close to anything that would warrant that kind of fantasizing.) I start swimming and the next thing I know, I’m entering my first triathlon (it was just a mini-sprint, but still). I actually start considering what it would be like to do an Ironman. I think there is something wrong with me.

The thing is, I like goals. I think they’re helpful in giving you a direction, giving someone like me, who tends to be a bit scattered, some focus. But if everything in my life turns into another goal, another thing to strive for, I fear somewhere along the way I forget about why I’m doing whatever it is that I’m doing. I stop doing that thing — running or bowling or swimming or writing or taking photos or whatever it is I do — I stop doing that thing because I love it and start doing it because I have to achieve, I have to strive, I have to get somewhere.

Of course, Maisie, at least as far as I know, does not have any goals when she gets outside. She is not worried about whether she will be able to run as far or as long or as fast as she did yesterday. She just runs, until she doesn’t, until she rests with her muddy paws framing her chin, or until her mother decides it’s time to walk. She doesn’t seem to have any judgment about the things she does when she is outside.

Lovely readers, do you have anything in your life that is unencumbered by expectation and achievement? How do your animals teach about doing something simply for the love of it? I love to hear from you, so feel free to use the comment section below to share your thoughts!

3 Replies to “In Which Maisie Shares her Joy of Running”

About Barks at Strangers

Needing a repository for all of the ramblings and musings inspired by rescuing Maisie, a pint-sized mutt with a gallon-sized personality, I started Barks at Strangers, a   whenever-I-can-squeeze-in-some-time blog dedicated to all the ways in which our non-human companions teach us about ourselves, inspire us to be better humans, make us laugh and make us cry, but mostly, show us how to open up our wounded hearts and let a little more light in.

Maisie, a 17 pound Corgi-Spaniel-Terrior (our best guess) mutt, channels her instructions on life through her somewhat misguided, often leash-reactive, sometimes barks-at-strangers but ultimately kind-hearted human companion (that would be me). She fired her little soul into my heart with her unwavering and intense gaze my first day volunteering at the shelter and now she lives with me and another less-than-perfect human, sometimes referred to as “Daddy”.

My name is Lauryn Shapter and I live with Maisie and my beautiful husband in a small town in rural Iowa. I love to write…songs and poetry, short fiction and creative non-fiction. I sing. I garden (or attempt to garden). I walk Maisie, a lot. My main gig is to write, record, and play music with my husband in a little band called Society of Broken Souls. Maisie is our road manager and though she truthfully gets very little done, she does offer her ears and her belly at the end of the night in whatever hotel in whichever town we may find ourselves in.

Thanks for visiting and for sharing, if you are so inspired; I’d love to hear from you. Maisie has her leash on. Shall we go for a walk together?